Use nested loops to demonstrate how to do simple image processing, by iterating through each pixel in an image and making some changes.

Before starting this section, you will want to install the cs20-image package. To do this, open Thonny and select Tools -> Manage packages…, then type in cs20-image and press Search. Once the package is selected, click install. You should now be able to use any image that you download with the example code shown below.

Be careful! You need to save the Python file and the image file in the same directory on your computer for this to work!

The following video (created by Code.org) describes how images are represented using binary digits, as well as an overview of how image filters work. It is a great introduction to the image filtering that follows.

Two dimensional tables have both rows and columns. You have probably seen many tables like this if you have used a spreadsheet program. Another object that is organized in rows and columns is a digital image. In this section we will explore how iteration allows us to manipulate these images.

A digital image is a finite collection of small, discrete picture elements called pixels. These pixels are organized in a two-dimensional grid. Each pixel represents the smallest amount of picture information that is available. Sometimes these pixels appear as small “dots”.

Each image (grid of pixels) has its own width and its own height. The width is the number of columns and the height is the number of rows. We can name the pixels in the grid by using the column number and row number. However, it is very important to remember that computer scientists like to start counting with 0! This means that if there are 20 rows, they will be named 0,1,2, and so on through 19. This will be very useful later when we iterate using range.

In the figure below, the pixel of interest is found at column c and row r. 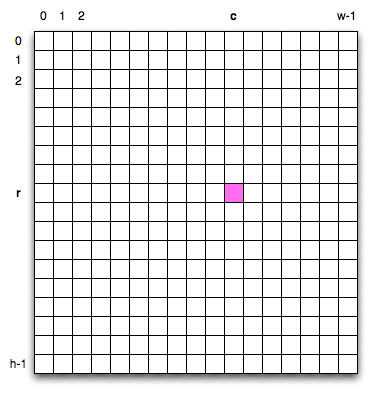 Each pixel of the image will represent a single color. The specific color depends on a formula that mixes various amounts of three basic colors: red, green, and blue. This technique for creating color is known as the RGB Color Model. The amount of each color, sometimes called the intensity of the color, allows us to have very fine control over the resulting color.

Here are the red, green and blue intensities for some common colors. Note that “Black” is represented by a pixel having no basic color. On the other hand, “White” has maximum values for all three basic color components.

Search the web for a color picker. Experiment by selecting different colors, and pay attention to the different RGB values that are generated from each color you select.

In order to manipulate an image, we need to be able to access individual pixels. This capability is provided by a module called image, provided in ActiveCode (or with the cs20-image package). The image module defines two classes: Image and Pixel.

image-processing-nested-loops3: If you have a pixel whose RGB value is (50, 0, 0), what color will this pixel appear to be?

Image processing refers to the ability to manipulate the individual pixels in a digital image. In order to process all of the pixels, we need to be able to systematically visit all of the rows and columns in the image. The best way to do this is to use nested iteration.

Nested iteration simply means that we will place one iteration construct inside of another. We will call these two iterations the outer iteration and the inner iteration. To see how this works, consider the iteration below.

We have seen this enough times to know that the value of i will be 0, then 1, then 2, and so on up to 4. The print will be performed once for each pass. However, the body of the loop can contain any statements, including another iteration (another for statement). For example,

Another way to see this in more detail is to examine the behavior with codelens. Step through the iterations to see the flow of control as it occurs with the nested iteration. Again, for every value of i, all of the values of j will occur. You can see that the inner iteration completes before going on to the next pass of the outer iteration.

Our goal with image processing is to visit each pixel. We will use an iteration to process each row. Within that iteration, we will use a nested iteration to process each column. The result is a nested iteration, similar to the one seen above, where the outer for loop processes the rows, from 0 up to but not including the height of the image. The inner for loop will process each column of a row, again from 0 up to but not including the width of the image.

The resulting code will look like the following. We are now free to do anything we wish to each pixel in the image.

It is possible to create an Image object that is “empty”. An EmptyImage has a width and a height. However, the pixel collection consists of only white pixels when it is created. We can create and draw an empty image like this:

After creating an empty image, we can change the color of a specific pixel by using the set_pixel function inside of a nested for loop.

To create a non-empty Image object, we pass in the name of a file that stores a digital image. The resulting image object has an attribute corresponding to the width, the height, and the collection of pixels in the image.

The Image class is shown below. Note that the first two entries show how to create image objects. The parameters are different depending on whether you are using an image file or creating an empty image.

Consider the image shown below. Assume that the image is stored in a file called skflag.png. Line 2 opens the file and uses the contents to create an image object that is referred to by img. Once we have an image object, we can use the methods described above to access information about the image or to get a specific pixel and check on its basic color intensities. 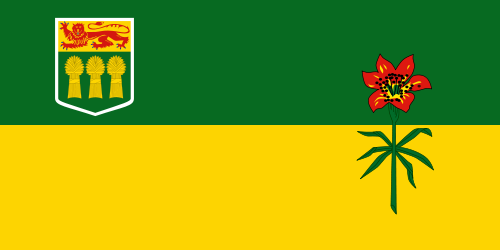 When you run the program you can see that the image has a width of 500 pixels and a height of 250 pixels. Also, the pixel at column 45, row 55, has RGB values of 253, 212, and 1. Try a few other pixel locations by changing the get_pixel arguments and rerunning the program.

1.7. Image Processing with an Existing Image¶ 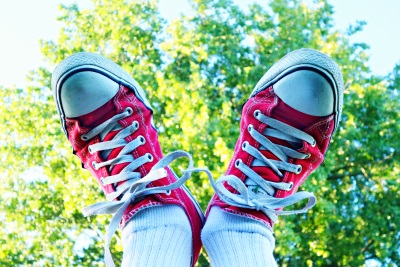 Let’s say that we wanted to increase the amount of green in the image shown above (sneakers.jpg). To do so, we would need to look at every individual pixel, determine how much green that pixel contained, and then increase it by some amount. Here is a simple program that does just that:

There is a chance that the following program will not finish execution before triggering a TimeLimitError in your web browser. To see the completed version of the image, you may either:

Let’s take a closer look at the code. After importing the image module, we create an image object called img that represents a typical digital photo. We use the get_width() and get_height() functions to create a window that is the same size as the image.

Lines 8 and 9 create the nested iteration that we discussed earlier. This allows us to process each pixel in the image. Line 10 gets an individual pixel at the current location of the nested loop.

Lines 12-14 extract the original intensity from the pixel. For red and blue, the new values stay the same as the original value. For the green intensity, we simply add 50 to whatever green amount was there previously. Note that if you pass a value higher than 255 or lower than 0 when setting the intensity of a pixel, the image module will automatically set the value to the highest/lowest value allowed (255/0). Once we have the new_red, new_green, and new_blue values, we can create a new pixel (Line 15).

Finally, we need to replace the old pixel with the new, adjusted pixel in our image. It is important to put the new pixel into the same location as the original pixel that it came from in the digital photo.

One of the easiest image processing algorithms will create what is known as a negative image. A negative image simply means that each pixel will be the opposite of what it was originally. But what does opposite mean?

In the RGB color model, we can consider the opposite of the red component as the difference between the original red and 255. For example, if the original red component was 50, then the opposite, or negative red value would be 255-50 or 205. In other words, pixels with a lot of red will have negatives with little red and pixels with little red will have negatives with a lot. We do the same for the blue and green as well.

The program below implements this algorithm using the previous image (skflag.png). Run it to see the resulting negative image. Note that there is a lot of processing taking place and this may take some time to complete (it will execute faster if you run it in Thonny). Also note that instead of using col and row as the variable names in the nested loop, x and y have been used. In your own programs, use whichever makes more sense to you!

The cs20-image module allows you to do a few things that cannot be done on the website version, including the .save("filename.jpg") method shown in the last line of the code above. 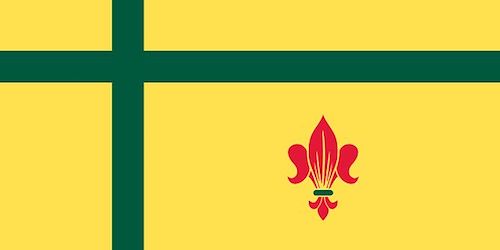 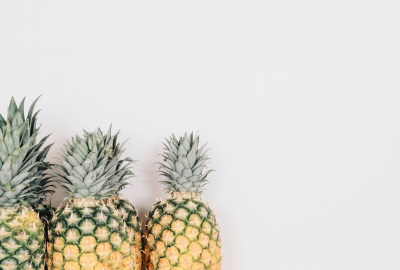 image-processing-nested-loops11: What will the following nested for-loop print? (Note, if you are having trouble with this question, review CodeLens 3).

image-processing-nested-loops12: What would the image produced from ActiveCode box 16 look like if you replaced the lines: