Explore how the while loop works in Python. Learn how to use the debug functions of Thonny. Continue to work on the current Python assignment, focused on input/output and string concatenation.

When we programmed in Reeborg, we used a while loop whenever we did not know the number of iterations (times the loop would repeat) before hand. This was helpful when we needed to do things like:

Similar to the if statement, a while statement uses a boolean expression to control the flow of execution. The body of while will be repeated as long as the controlling boolean expression evaluates to True. In the example above, the function front_is_clear() returned either True or False.

The following figure shows the flow of control. 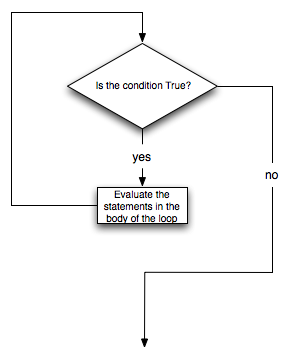 A short example of a while statement follows.

It may be helpful to view the code above using codelens:

You can do something similar to the codelens feature above using Thonny. First, click on View -> Variables to see the values of variables while your code runs. 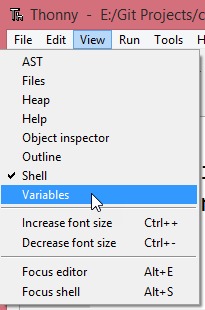 Copy/paste the while loop code from above into the Thonny text editor. Now press the Debug current script button. Thonny will now highlight the next line it will evaluate. You can control the debugger using the Step over, Step into, and Step out buttons. For now, have Thonny go through the code by pressing Step into (or press the keyboard shortcut F7).

Using a visualization tool like codelens or Thonny’s debugger can really help you build a mental model of how Python works. Whenever you encounter a piece of Python code that you do not understand, your first reaction should be to run the code in one of these environments to help yourself figure out how it works!

The following code is just slightly different from the version above. Can you spot the difference? Before you run the code, try to figure out what it will print. Will it be the same as the first version?

Though Python’s while is very close to the English “while”, there is an important difference: In English “while X, do Y”, we usually assume that immediately after X becomes false, we stop with Y. In Python there is not an immediate stop: After the initial test, any following tests come only after the execution of the whole body, even if the condition becomes false in the middle of the loop body.

What will the following code do? Note: it might be better to run this in Thonny, rather than here in your browser…

Write a program that will print out the numbers 1 to 100.

Write a program that counts down from 20 to 1, then prints Blastoff!.

Write a program that asks the user to enter a password. Keep asking for the password until they enter “sask”. Once they have successfully typed in “sask”, print out What a great place!.

Please spend the rest of the class continuing to work on your current Python assignment (likely a string input/output assignment like Madlibs, or something similar).

Next Section - 9. Our First Turtle Program