3. Chase the Mouse and Drawing Polygons (Repeat and If/Else)¶

Use a forever block combined with an if/else block to make a character follow the mouse, then make a sound when it reaches the mouse cursor. Introduce the pen in Scratch, and use it to draw regular polygons with the repeat block.

Let’s make a program that has a cat following the mouse cursor around the stage, then meowing when it touches the mouse cursor. To start, hook up a forever block to a when key is pressed event block. Now put a point towards mouse-pointer block inside the forever block. Your program should look like this: 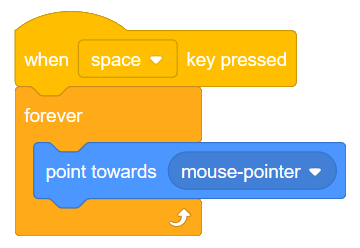 When you press the space key, you should see the cat continue to turn and face the direction of the mouse cursor. To make the cat move, connect a move 10 steps block as the last part of the forever block, as follows: 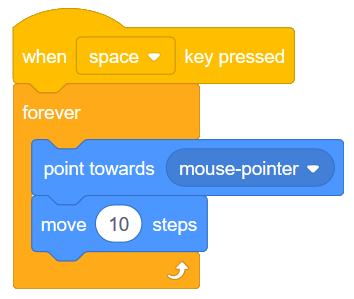 When you press the space key now, the cat should be following your mouse cursor around the screen. There is an obvious problem, however, when the cat actually catches the mouse. The cat overshoots the mouse, gets to the other side of it, turns around, then does the same thing all over again. Let’s fix this situation by having the cat stop moving when it gets close to the mouse, and make a meowing sound instead.

We learned in the previous lesson that anytime you want to ask the computer a question, you can do it using an if-then block. Although we could use an if-then block to ask whether the cat is close to the mouse, in this situation we want to do one thing if the cat is far away, and a different thing when the cat is close. For situations like this, we can use a if/else block. The question we want to ask the computer is whether or not the cat is currently touching the mouse pointer. If it is, we want to have the cat make a meow sound. If it isn’t, the cat should move closer to the mouse. To do this in Scratch, hook up an if/else block inside your forever block as follows: 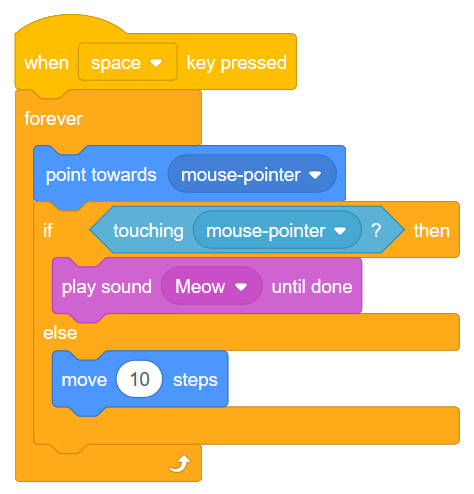 Notice that when the cat touches the mouse cursor, the entire script pauses and waits until the sound has finished playing. If this isn’t the behaviour you want, you can use the play sound block instead of the play sound until done block.

scratch-conditionals2: Given the code below, how many times would you hear a meow sound when you click the green flag? 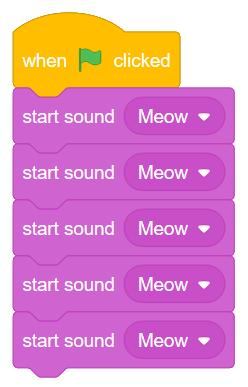 scratch-conditionals3: Given the code below, how many times would you hear a meow sound when you click the green flag? 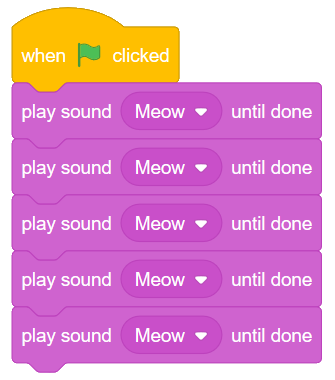 scratch-conditionals4: Given the code below, how many times would you hear a meow sound when you click the green flag? 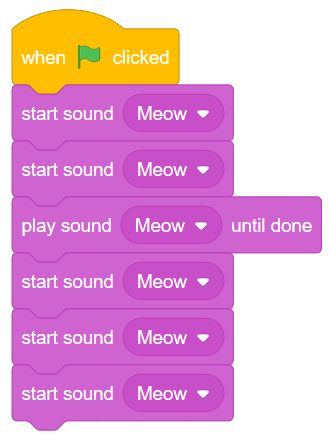 To allow your Scratch character to access the Pen tab, you may need to click on the “Add Extensions” button (on the bottom left of the screen), then click on the Pen button.

Every sprite in Scratch has the ability to draw with a virtual pen that they are holding at all times. This allows each sprite to leave a trail that shows where they have walked. In order to do this, you need to use the pen down block from the Pen tab, then have your sprite move. Explore this by trying the following: 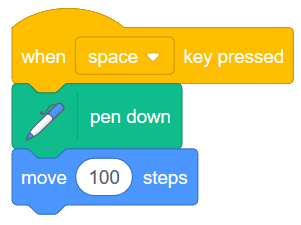 To remove the path you have drawn, double click on the clear block in the Pen tab.

Now that you know how to draw on the stage, see if you can draw a square using only the pen down, move __ steps and turn __ degrees blocks.

For many students, the first square they draw would be with code that looks like this: 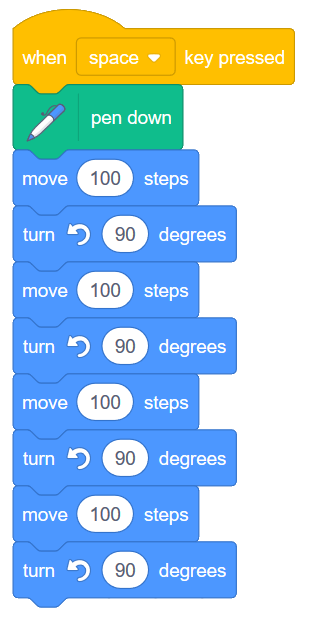 Although this does create a square, notice that there is code that is repeated multiple times. Any time you notice identical code being repeated, it should trigger a warning bell in your head saying “There’s got to be a better way!”. Think back to when we made a sprite shrink. We used a repeat block. We can improve the drawing a square code above by putting the code that shows up over and over into a repeat block, as follows: 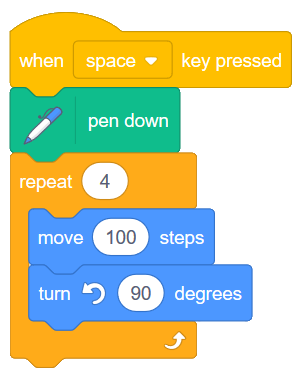 Adapt the code above to allow you to draw the following regular polygon shapes: triangle (3 sides), pentagon (5 sides), hexagon (6 sides), octagon (8 sides). Set up your project so that pressing the t key draws a triangle, s draws a square, p draws a pentagon, etc.

If you complete the regular polygons before the rest of your classmates, try to draw a circle and a five sided star.

This lesson draws on ideas from the Beauty and Joy of Computing Curriculum .