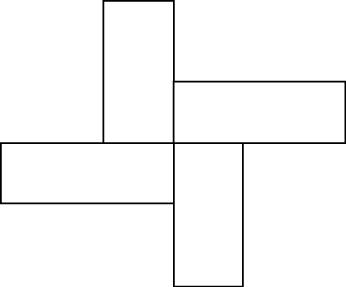 Draw the image above using the Python turtle module. You must define a function as part of your solution!

In this example, the arguments to the abs function are 5 and -5.

Some functions take more than one argument. For example the math module contains a function called pow which takes two arguments, the base and the exponent.

Of course, we have already seen that raising a base to an exponent can be done with the ** operator.

Another built-in function that takes more than one argument is max.

max can be sent any number of arguments, separated by commas, and will return the maximum value sent. The arguments can be either simple values or expressions. In the last example, 16 is returned, since it is larger than 11, 15, and 0. Note that max also works on lists of values.

Notice that each of the above functions return values that can be used to build more complex expressions.

Functions that return values are sometimes called fruitful functions. A function that doesn’t return a value can be simply called a function, or if we want to make it extremely clear, a non-fruitful function.

Fruitful functions still allow the user to provide information (arguments). However there is now an additional piece of data that is returned from the function.

How do we write our own fruitful function? Let’s start by creating a very simple mathematical function that we will call square. The square function will take one number as a parameter and return the result of squaring that number. Here is the black-box diagram with the Python code following.

The return statement is followed by an expression which is evaluated. Its result is returned to the caller as the “fruit” of calling this function. Because the return statement can contain any Python expression we could have avoided creating the temporary variable squared_value and simply used return original_number * original_number. Try modifying the square function above to see that this works just the same. On the other hand, using temporary variables like squared_value in the program above makes debugging easier. These temporary variables are examples of local variables, which will be explained further in the next section.

As you step through the example in codelens below, notice that the return statement not only causes the function to return a value, but it also returns the flow of control back to the place in the program where the function call was made.

Another important thing to notice as you step through this codelens demonstration is the movement of the red and green arrows. Codelens uses these arrows to show you where it is currently executing. Recall that the red arrow always points to the next line of code that will be executed. The light green arrow points to the line that was just executed in the last step.

When you first start running this codelens demonstration you will notice that there is only a red arrow and it points to line 1. This is because line 1 is the next line to be executed and since it is the first line, there is no previously executed line of code.

Finally, there is one more aspect of function return values that should be noted. All Python functions return the value None unless there is an explicit return statement with a value other than None. Consider the following common mistake made by beginning Python programmers. As you step through this example, pay very close attention to the return value in the local variables listing. Then look at what is printed when the function returns.

The problem with this function is that even though it prints the value of the square, that value will not be returned to the place where the call was made. Since line 6 uses the return value as the right hand side of an assignment statement, the evaluation of the function will be None. In this case, result will refer to that value after the assignment statement and therefore the result printed in line 7 is incorrect. Typically, functions will return values that can be printed or processed in some other way by the caller.

variable-scope8: What is wrong with the following function definition:

variable-scope9: What will the following function return?

1.3. Variables and Parameters are Local¶

An assignment statement in a function creates a local variable for the variable on the left hand side of the assignment operator. It is called local because this variable only exists inside the function and you cannot use it outside. For example, consider again the square function:

If you press the ‘last >>’ button you will see an error message. When we try to use squared_value on line 6 (outside the function) Python looks for a global variable named squared_value but does not find one. This results in the error: Name Error: 'squared_value' is not defined.

Formal parameters are also local and act like local variables. For example, the lifetime of original_number begins when square is called, and its lifetime ends when the function completes its execution.

On the other hand, it is legal for a function to access a global variable. However, this is considered bad form by nearly all programmers and should be avoided. Look at the following, nonsensical variation of the square function.

Although the bad_square function works, it is silly and poorly written. We have done it here to illustrate an important rule about how variables are looked up in Python. First, Python looks at the variables that are defined as local variables in the function. We call this the local scope. If the variable name is not found in the local scope, then Python looks at the global variables, or global scope. This is exactly the case illustrated in the code above. power is not found locally in bad_square but it does exist globally. The appropriate way to write this function would be to pass power as a parameter.

For practice, you should rewrite the bad_square example above to have a second parameter called power.

There is another variation on this theme of local versus global variables. Assignment statements in the local function cannot change variables defined outside the function, without further (discouraged) special syntax. Consider the following codelens example:

To cement all of these ideas even further lets look at one final example. Inside the square function we are going to make an assignment to the parameter original_number There’s no good reason to do this other than to emphasize the fact that the parameter original_number is a local variable. If you step through the example in codelens you will see that although original_number is 0 in the local variables for square, the original_number in the global scope remains 2. This is confusing to many beginning programmers who think that an assignment to a formal parameter will cause a change to the value of the variable that was used as the actual parameter, especially when the two share the same name. But this example demonstrates that that is clearly not how Python operates.

variable-scope14: What is a variable’s scope?

variable-scope15: What is a local variable?

variable-scope16: Can you use the same name for a local variable as a global variable?

Try the following practice problems to be sure you understand how to create fruitful functions. Your functions have to return the correct value – using print() will not work. When you run your code for these questions, your code will automatically be checked with a number of test cases to see if your function works in all situations. You will be able to see any situations in which your function does not provide the correct answer.

The only thing you need to do for the following is to complete the function definition! You do not need to call the function, as that will be done automatically for you.

The parameter the_number needs to be doubled. Return the doubled value of the number that is passed in.