12. The Time Module and Using a Micro:bit¶

Learn about the time module. Learn how to use a BBC Micro:bit to sense the physical world, and send output to the LED grid of the Micro:bit.

Sometimes, we’d like to wait a bit before running the next command in a Python program. To do this, we can import time, then use the sleep() function. An example is below:

The following only applies to users of Windows that are on a version earlier than Windows 10. If you are using Windows 10, Mac, or Linux, you can skip this step.

If you are on a Windows machine (< Windows 10), you will need to download the mbed driver if you want to use your Micro:bit as an input/output device. Note that you will need to have a Micro:bit plugged into your machine when installing the driver, and that it requires admin rights. If you want to simply run code on your Micro:bit, and not communicate with your computer, no driver is required for any platform (but this does really limit the types of interesting things that can be done, and none of the examples in the textbook will work).

Your Micro:bit can be used in two modes:

For the purposes of this textbook, we will always be using the Micro:bit as an input/output device by communicating over a USB connection.

If you want to learn more about how to use the Micro:bit without it being hooked up to a computer, you can find out about how to do that on the Microbit website. Using web based platforms, you can create code using a block based environment similar to Scratch, or an online Python environment. Note that these environments simply run your code on the Micro:bit, and do not send any signals back to the computer.

You should now see an I/O image on the LED grid of the Micro:bit, which tells you that your Micro:bit is ready to communicate with Python (though you still need to install a module in Thonny, as described below). 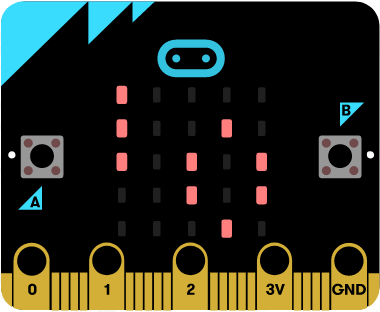 12.2.4. Installing the Micro:bit Module in Thonny¶

In order to communicate with the microbit in Python, you need to install the cs20-microbitio package in Thonny. To do that, go to Tools -> Manage packages…, type in cs20-microbitio into the search bar, and install. You only need to do this once, after which you should be able to use import microbit whenever you want to interact with the Micro:bit in Python.

Once you have done that, try running the code below:

When you press Run, there will be a prompt in the console telling you to disconnect the Micro:bit, then press ENTER. Follow the prompts, which allow the bitio module to detect which device connected to your computer is the Micro:bit. The console will look something like this:

Once the connection is established, you should see the message scroll across the 5x5 LED grid on your Micro:bit.

If we wanted to display the letters from the word “SASK” one at a time, there are a number of different ways we could do it. Our first thought might be to do something like this:

Although this technically works, when you run this code, you will notice that the letters flash on the LED grid very quickly. To slow this down a bit, we can use the time module we experimented with above. Consider the following version:

This works much better! We can now see each letter appear on the screen then pause for half a second before the next letter appears. However, you will notice that we are essentially repeating the same instruction four times in a row. We can improve the code using a for loop to perform the repetition, as follows:

The examples above used the Micro:bit as an output device, as we sent instructions telling the Micro:bit to change what the LED grid was displaying. We can also use the Micro:bit as an input device. One of the built in ways of taking input from the Micro:bit is the accelerometer. An accelerometer allows us to detect the orientation of the device (in other words, whether it is tilted in the x, y or z axis). The following example checks the x axis to detect whether the device has been tilted left or right. To help you understand the values that are sent back to Python, I have printed out the value of x (note that in order to concatenate the x value, I had to convert it’s data type to a string).

To use the accelerometer data from the Micro:bit to control a turtle, we can adapt the program as follows:

Adapt the program shown above to make your turtle: